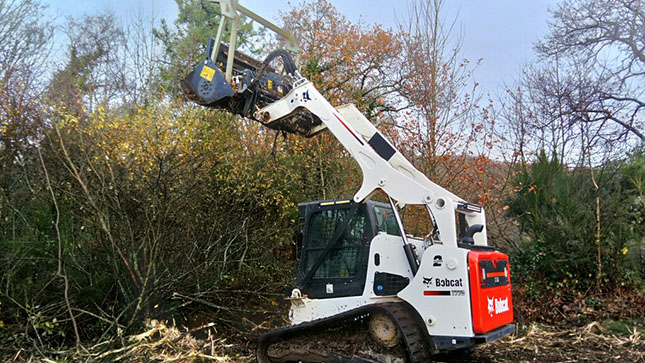 Europeans associate the town of Carhaix-Plouguer, in central Brittany, on the border of three French departments (Finistère, Côtes-d’Armor and Morbihan), with its Vieilles Charrues festival, one of the biggest music festivals in France. But here in the heart of Brittany, Bobcat equipment has an equally solid reputation and strong roots, having contributed to the dynamic and diversified economy of this region for over thirty years.

It is easy to see why TIPMAT, a dealer and distributor of Bobcat/Doosan equipment, chose to set up shop here in Carhaix. The town is just a 60-minute drive from Brittany’s largest ports, such as Brest, Quimper, Lorient, Saint-Brieuc and Saint-Malo. Strategically located, Carhaix provides an exceptional environment at the crossroads of the region’s various economic activities. A versatile economy, shaped by SMEs

With industries such as fisheries, maritime transport, agriculture, forestry, mining, livestock farming, logistics, agri-food processing, construction, land-use planning, Brittany continues to be one of France’s most dynamic regions, with unemployment at its lowest and a dense fabric of SMEs which are among the region’s greatest strengths.

In 2018, TIPMAT, which is based in Carhaix, sold just under 100 new and pre-owned Bobcat and Doosan machines including loaders, telehandlers and compact excavators, to be used in farming, livestock breeding and forestry activities; in the construction industry (earthworks, drainage, demolition and soil remediation especially on livestock farms, of which there are many in central Brittany), equestrian centres and in ports (for the maintenance of docks and the unloading of cargo holds).

The TIPMAT team at Carhaix mainly works in the field, specialising in after-sales service, with eight mechanics (a foreman and two permanent mechanics in the workshop as well as three travelling mechanics with four mobile workshops and a van for lighter support work) and an assistant foreman.

“It’s difficult to quantify this, but here in central Brittany, I think the Bobcat/Doosan fleet consists of almost a thousand vehicles in operation. In certain rural communities, such as Gourin in the Morbihan, which is approximately 15 km to the south of Carhaix, there are up to 25 Bobcat machines in an area of just a few square kilometres,” says Jean-Baptiste Lucas, the director of TIPMAT in Carhaix-Plouguer.

“Daniel Jaffré Sarl”, a family business that operates out of Gourin, currently has a fleet of 12 different Bobcat machines, with about thirty different attachments including buckets, grapple buckets, sweepers, trenchers, chippers, augers, graders and steel tracks. Ever since he bought his first compact loader, a Bobcat 543, for his farm and his large chicken coops in 1987, Daniel Jaffré – followed by his two sons, Anthony (33) and Jonathan (29) – has developed a business that specialises in earthworks and drainage projects, which relies entirely on the performance and the versatility of Bobcat equipment. In just over 30 years, Daniel, Anthony and Jonathan Jaffré have “collected” and operated about thirty Bobcat machines, covering 20 different models

Jonathan Jaffré, the youngest son, explains: “When our father bought his first compact loader in 1987, a Bobcat 543, he initially intended to use it to clear the manure out of the three large chicken coops. Two of these buildings were at least 300 m long and 12 m wide, with three rows of posts inside, and a dirt floor. At the time, Bobcat equipment was still very much unknown in France and he was immediately convinced by the machine’s manoeuvrability, compactness and performance.”

Subsequently, Daniel Jaffré cleared the chicken coops of one of his neighbours, and then those of others and so on and the rest is history as they say. In just a few years, this developed into a full-time activity. According to everyone in the area, he truly invented and developed a new niche business. Nowadays there are six companies in Brittany that specialise in the clearing of chicken coops, stables and housing on livestock farms – of which there are many in the region. But historically speaking, Daniel Jaffré was the first.

The building housing the machines in the Jaffré family business in Gourin is a real Bobcat museum with old photos, all kinds of parts and attachments and an amazing collection of branded objects including clothing, caps, calendars, pennants, umbrellas and scale models. Anthony Jaffré, the oldest son, who also trained as a lorry mechanic, tells us: “Before we could even walk, my brother and I would sit on the seat of these Bobcats next to our dad. I can’t remember when exactly we started to operate them ourselves for the first time but I think we must have been 3 or 4 years old. In the last ten years, we both joined the family business. Every day we work with at least one of the 12 Bobcat machines we currently own, each tallying up at least 1000 to 1200 hours a year on this equipment.”

The performance, manoeuvrability and compactness of their Bobcat equipment enabled the Jaffré family to specialise in all kinds of precision earthworks and drainage projects. Their versatility has allowed them to take on all kinds of jobs. They work anywhere, and in any weather conditions.

Daniel Jaffré, the father, has continued to specialise in the maintenance and clean-up of chicken coops, stables and hangars, of which there are many in central Brittany. This is physically demanding work, which requires a lot of endurance and concentration.

But it is also a precision job, working in a very confined environment, which relies on dexterity and careful manoeuvring. Ever since he bought his first Bobcat 543, Daniel Jaffré swears by the hand/foot controls, just like his sons. Anthony Jaffré agrees: “When doing precision work, this allows us to better manoeuvre the machine, relying on our reflexes for better control. The hand/foot controls make you feel as if you are one with the machine and you immediately notice any resistance or obstacles.”

Daniel’s sons – Anthony and Jonathan – have succeeded in diversifying the business, specialising in earthworks, land development, drainage, the remediation of dirt floors and groundworks in preparation for the pouring of the concrete to meet the required hygienic levels for floors in farm buildings, and even including the clearing, reduction and maintenance of forests. They also take on fence post work and carry out regular landscaping and land development jobs. The Bobcat E10 compact excavator is used in one of the world’s largest open-pit andalusite mines.

Three times a year, Jonathan Jaffré does clearance work and cleans the equipment used in the Glomel mine (midway between Carhaix and Gourin), which is the world’s largest open-pit andalusite mine.

The Glomel mine, which is operated by IMERYS, produces over 60,000 tonne of andalusite every year, accounting for one quarter of the world’s production. With its unique refractive index and high heat resistance, applications for this rare ore include its use in parts for rocket nose cones, blast furnaces and other areas. The mine, which opened in 1970, now spans several square kilometres and employs a workforce of more than one hundred full-time employees.

All in all, the order book of this family business, in the heart of Brittany, is never empty. The commitment and professionalism of the Jaffré family, combined with the performance and precision of Bobcat’s equipment, have contributed to their long-standing high reputation.

For more information about Bobcat and Bobcat products, visit www.bobcat.com