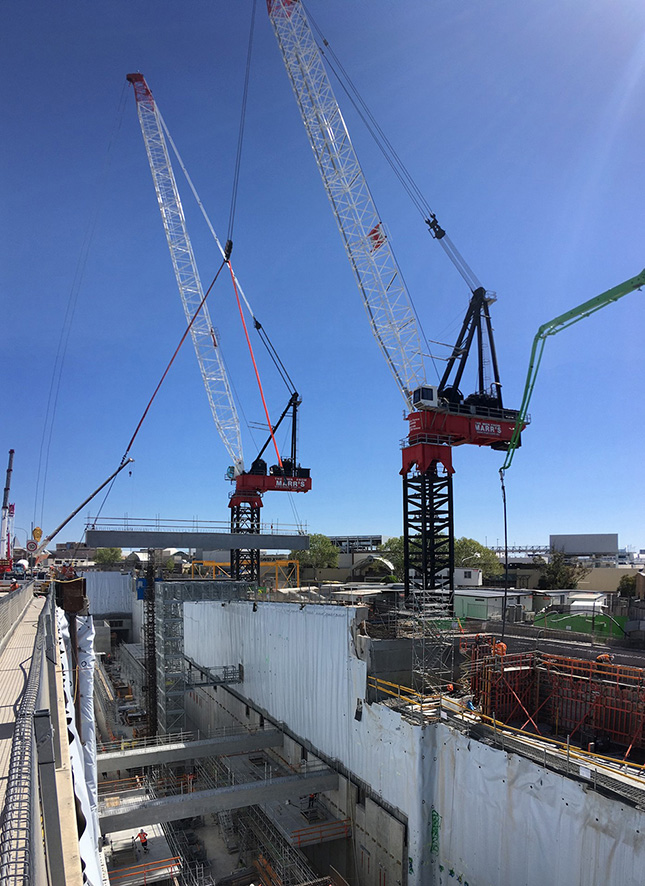 Two tower cranes, supplied by Australian heavy lifting specialist Marr Contracting Pty Ltd (The Men From Marr’s), were preferred to traditional crawlers as a key phase of the Sydney Metro was completed recently.

With 16 construction sites on the opening Northwest stage alone and an overall project value of over AUD20 billion, the Sydney Metro public transport project is notable for its scale and complexity. The Northwest Rapid Transit (NRT) consortium, comprising of Australia’s John Holland, CPB Contractors and UGL Rail, with MTR Corporation of Hong Kong, was awarded the operations, trains, and systems contract for this facet of the project. A variety of tasks included building eight new railway stations.

Marr Contracting was awarded a scope of work by NRT at the Castle Hill Station, covering installation, operation, and removal of cranes, including extensive methodologies and lift plans. A previously considered solution was based on crawler cranes travelling along the edge of a 200m x 30m cut-and-cover station box in order to complete the required lifts, but Marr’s heavy-lift, luffing jib crane solution centred on both cranes sitting alongside the box and provided lifting capacity across the entire site.

Marr Contracting Managing Director, Simon Marr, said, “The site was congested and landlocked between two existing roads. The crawlers proposed would have placed a large surge load against the station box walls, which meant that the client would have to excavate around the box and fill in with groundworks to specific bearing pressures. The costs were excessive and would have had a major impact on the programme. Furthermore, using the crawlers would still have been a limited solution.”

He added, “The project will serve as a blueprint for future mega projects as decision makers recognise the benefits of decongested sites. Our approach, not only with NRT but other clients also, is to use less cranes, but the right cranes to achieve greater efficiencies. For example, our solution facilitated lifting of loads from outside the project’s boundaries, which further decluttered the site and led to additional time and economic savings – not to mention a safer work environment.”

The cranes provided were both the result of design collaboration between Marr and manufacturer Favelle Favco: a 330t capacity M2480D with 90m boom and a 200t capacity M1680D with 62m boom. They lifted a variety of loads, including pre-cast beams, columns and panels weighing up to 60t; in addition to site machinery, such as earth-moving equipment, mobile cranes, concrete, reinforcing steel, and general construction materials required for a tunnels project of such magnitude. Dialogue was opened in April 2016, and a craneage methodology developed in consultation with the client to suit their preferred construction methodology. The first crane was erected a year later and the job completed in October 2018.

Marr Contracting have leveraged the success of the NRT project to present the benefits of combining fewer cranes with greater efficiency on similar scale sites, including the new Sydney Metro City and Southwest Stage where they have been awarded multiple stations using this same new technology. A number of global projects have adopted the cut-and-cover box method, where crawler cranes are nearly always the immediate consideration. However, the installation of the right tower cranes can change the way the entire project is constructed, principally because of the ability to lift bigger pieces, reduce land, and remove the requirement for costly, challenging, and time-consuming groundworks.

Simon Marr said, “Using fewer, higher capacity cranes also reduces the chances of collisions as multiple work fronts interact. The benefits of anti-collision technology are widely preached in our industry but it is often a band-aid solution for poor crane selection. We continuously strive to challenge traditional methodologies in order to design craneage strategies that are built around the requirements of the project versus the limitations of the cranes.”