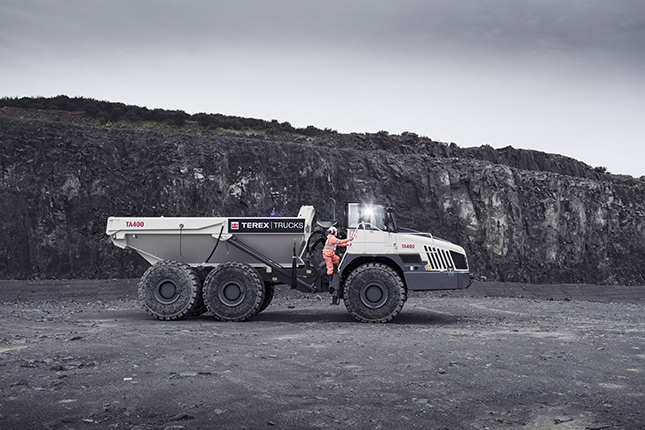 Terex Trucks is benefitting from the construction boom in Russia. Choosing to strike while the iron is hot, Terex Trucks – together with its exclusive dealer, Mining Eurasia – wants to bring its articulated haulers to even more customers in new locations.

Covering a geographical area of 17.1 million km2 (10.6 million mi2), Russia is the largest country in the world. While it hasn’t always been the richest, the Russian economy is particularly strong at the moment. In 2018, it grew faster than it had done for more than five years – largely due to the uptick in construction. The Siberian natural gas pipeline project, major infrastructure renovation work – and not forgetting the 2018 World Cup – all helped to create a boom in construction projects throughout Russia.

Terex Trucks – the Scottish articulated hauler manufacturer – has benefitted quite significantly from this. Choosing to strike while the iron is hot, Terex Trucks wants to expand its Russian footprint even further by reaching more customers in new locations.

“Russian customers are very cost conscious,” says John Rotherford, global key accounts director. “That’s why our TA400 articulated hauler does particularly well there, as it ensures low cost per tonne and maximum productivity. The TA300 is also popular among Russian customers. It’s reliable and easy to operate, both these factors help to drive the majority of purchasing decisions. Looking beyond products, one of the key things Terex Trucks offers (that many manufacturers do not) is dedicated on-site maintenance and support services. This is especially valuable in Russia because the country is so vast, meaning that dealers’ branches are often based hundreds of miles away from their customers.” Earlier this year, Terex Trucks appointed Mining Eurasia as its official distributor of articulated haulers in the Russian Federation. “Terex Trucks is very happy with its partnership with Mining Eurasia,” says John. “Going forward, the focus will be on growth and further development. Together with Mining Eurasia, we’re keen to expand into the far east and the far north west of the country.”

A popular choice in mines and quarries, the TA300 is a sturdy piece of equipment. It is powered by a Scania DC9 engine and has a maximum payload of 28 tonnes (30.9 tons), maximum torque of 1880 Nm (1309 lbf ft) and can achieve gross power of 276 kW (370 hp). It is equipped with true independent front suspension as standard, resulting in excellent traction control and operator comfort. Since August last year, the TA300 has incorporated the new EP320 transmission as standard, which helps to deliver a 5% improvement in fuel efficiency and an enhanced performance. The upgraded transmission comes with two additional forward gears – eight in total – as well as four reverse gears. This helps to ensure smoother gear shifting and thereby superior operator comfort.

The TA400, the largest articulated hauler on offer from Terex Trucks, has a maximum payload of 38 tonnes (41.9 tons) and a heaped capacity of 23.3 m3 (30.3 yd3). The Allison HD4560 transmission boasts high performance oil and up to 6,000 hours between service intervals. Both machines come with hydrostatic power steering and all-hydraulic braking systems, helping to ensure a safe and comfortable ride.