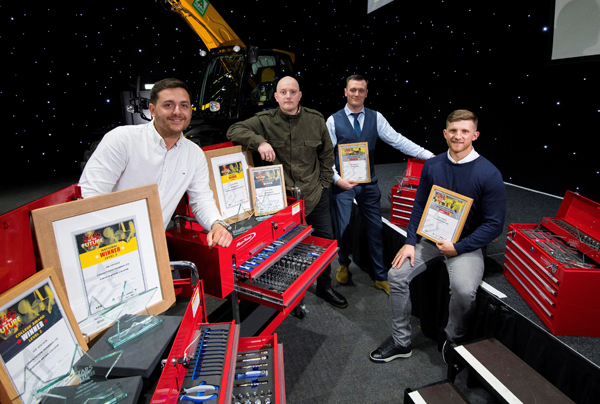 The UK’s most promising apprentices and trainees in the construction plant sector have been recognised at the Construction Plant-hire Association’s (CPA) Stars of the Future Awards 2019.

Now in its seventh year, this year’s awards presentation was hosted at the Heart of England Conference and Events Centre in Fillongley near Coventry. 2019 was a landmark year as traditionally Stars of the Future has only rewarded plant mechanic apprentices but this year, two new national titles of CPA Plant Operator Star of the Future and CPA Lifting Technician Star of the Future were also up for grabs in recognition of new trailblazer apprenticeships. For the first time, employers were also invited to make nominations, in addition to colleges delivering apprentice training. The awards are open to apprentices and trainees in the construction plant sector across the UK.

The CPA welcomed over 300 apprentices, family members, employers and colleges to the prestigious awards ceremony. As well as A-Plant, the event was supported by sponsors IPAF, Greenshields JCB, Snap-on Tools, Liebherr, ACOP Group and Stokey Plant Hire. Prior to the awards being given out by CPA Chief Executive Kevin Minton assisted by Rob Squires, CPA Training and Safety Manager, presentations were delivered by Patrick Flannery, MD of P Flannery Plant Hire and Campbell Howie, who was a previous CPA National Star of the Future winner in 2017 and has since set up his own construction plant repair business in Ayrshire, Scotland.

The 2019 CPA Stars of the Future Winners

National Level 2 winner Joe Adcock who attends Askham Bryan College and is employed by Cementation Skanska Ltd said: “I’m ecstatic to win this award and it’s great to be recognised on a national basis. My current specialism is in ‘piling rigs’ and my ambition is to master my trade of plant mechanics and gain as much knowledge as I possibly gain before progressing into management and helping drive the industry forward.”

National Level 3 winner Adam Dalton from National Construction College East and employed by Toppesfield Ltd said: “I’m really happy to win the national award. I feel I’ve been able to thrive in the apprentice format as it applauds the ethics of hard work, competence and self-motivation and I was very pleased to receive a Distinction at NVQ Level 2. I’m hoping to become a Senior Fitter and eventually move into management.”

For the national Level 3 award, Adam Davies from Molson Equipment Services and Wiltshire College was Highly Commended and won a Snap-on torque wrench. The other finalists for the national Level 3 award were Dan Pickles from Charles Wilson Engineers and Askham Bryan College, Michael Barton from Chippindale Plant and Myerscough College and Scott Paskin who is employed by Dewsbury and Proud and attends NSCG Stafford College.

Jake Howard from P Flannery Plant Hire, who was declared CPA Plant Operator Star of the Future at the event said: “I’m over the moon to win this award. Growing up I always wanted to play with toy diggers and machines and I love my job as a plant operator. I believe that hard work pays off and small amounts of knowledge gained daily will result in me knowing the ins and outs of the whole industry.”

In recognition of his award, Jake won a bespoke course supplied by ACOP Group to both learn and operate a tracked dozer and gain a CPCS red card bearing that category. On completion, he will also get the opportunity, courtesy of Stokey Plant Hire, to spend the day with the driver of and the rare opportunity to operate the Caterpillar D11T Dozer. The D11 dozer, at over 100 tonnes, is one of the largest production dozers in the world, with only two existing in the UK and both owned by Stokey Plant Hire.

Niki Fitzgerald who is employed by Select Plant Hire and was declared CPA Lifting Technician Star of the Future said: “I was shocked to win this award and I feel very lucky. I’ve always been super keen and I ask a lot questions. For me, it’s all about self-improvement and I’ve previously been in the armed forces and also operated my own carpentry company. I’m now part of a huge team at Select and we really are well looked after.”

Niki’s prize has been supplied by Liebherr (GB) Ltd, whereby he will have the opportunity to visit a relevant Liebherr crane manufacturing plant in Germany. Liebherr staff will accompany him and provide accommodation, whilst the CPA will arrange suitable flights.