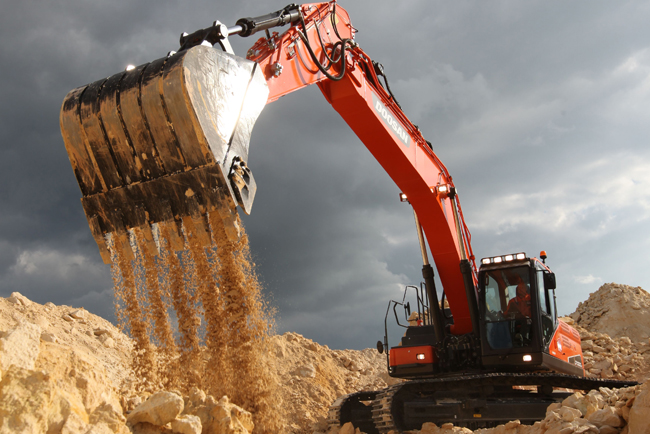 The 30 tonne DX300LC-5 crawler excavator from Doosan has won the EquipmentWatch Lowest Cost of Ownership (LCO) Award in the Excavators Crawler Medium category for the second year running.

The Lowest Cost of Ownership Awards are the industry’s only accolade of their kind, based on empirical data regarding the long-term cost of heavy and compact equipment. They are organised by EquipmentWatch, a world leader in data, software and insights for the heavy equipment industry. Nominees are recognised within 15 different categories of machine that exhibit the lowest cost of ownership over a five year span.

Total cost of ownership is one of the most important aspects that buyers take into account when they purchase equipment and the award won again by the DX300LC-5 shows why Doosan equipment is always rated highly for great performance and value-for-money. The award is a further illustration of why Doosan is one of the world’s top construction equipment manufacturers.

The DX300LC-5 is powered by the Doosan DL08 6-cylinder diesel engine, with an output of 202 kW of power at 1800 rpm, providing a huge 27% increase in engine power and a massive 30% boost in torque over the previous LC-3 model. The engine meets Stage IV emission regulations without the need of a diesel particulate filter (DPF), through the use of cooled exhaust gas recirculation (EGR) and selective catalyst reduction (SCR) after-treatment technologies.

As well as the Doosan engine, the DX300LC-5 in common with all Doosan Stage IV machines has innovative and exclusive features that lead to huge reductions in fuel consumption amounting to an average of 10% compared to the Stage IIIB machine. Among these features is the ‘Trip Meter Setting’ screen which allows operators to check fuel consumption daily (or over a desired period) directly from the control panel; the Auto Shut-Off provides an automatic shut down for the engine after a pre-set time when the machine has been idling for a specified time (3 to 60 minutes configurable by the operator); and to save even more fuel, there is a special Doosan-developed system, SPC (Smart Power Control), to optimise the balance between the pumps’ output and the diesel engine.

To further maximise durability and reduce noise, the DX300LC-5 and all other Doosan LC-5 models are equipped with EM (Enhanced Macro-surface) bushings, which are also much more effective than regular bushings when greased.

Air pre-cleaners are fitted as standard, to blow much of the dust, dirt, insects, rain and snow out of the air intake, to ensure cleaner air is sent to the engine air filter. This extends air cleaner servicing intervals, enhancing uptime and productivity.

Doosan has also added protection to the inner cab air filter and redesigned the cab air-conditioning filters for easier replacement. Recommended for dusty environments (such as quarry applications), the oil bath (9.5 l) pre-cleaner is available as an option to remove dust from the air intake, extending air cleaner servicing intervals dramatically.

To avoid permanent engine damage, an acoustic alarm has been added to call the operator’s attention to ‘water in fuel’. If the operator ignores the signal after several alerts, the engine and pump are automatically derated. In addition, to make it easier for operators to understand the importance of warnings and to communicate the proper warning codes, pop-up menus appear with detailed information with easier to identify warnings.

The service allows owners and dealers to remotely monitor and communicate with Doosan machines via the DoosanConnect telematics website. Also available for retro-fitting in a kit form, DoosanConnect customers are provided with their own account so that they can manage the machines in their fleet using the system.

As well as the Excavators Crawler Medium category won by the DX300LC-5, other categories included those entitled Backhoes, Dozers Track Large and Motor Graders.  The S70 skid-steer loader and T590 compact track loader from Doosan’s sister company, Bobcat, won the Lowest Cost of Ownership Awards in the categories entitled Skid Steer Loaders Small and Loaders Compact Track, respectively. It is also the second time in a row that the S70 has won the Skid Steer Loaders category.